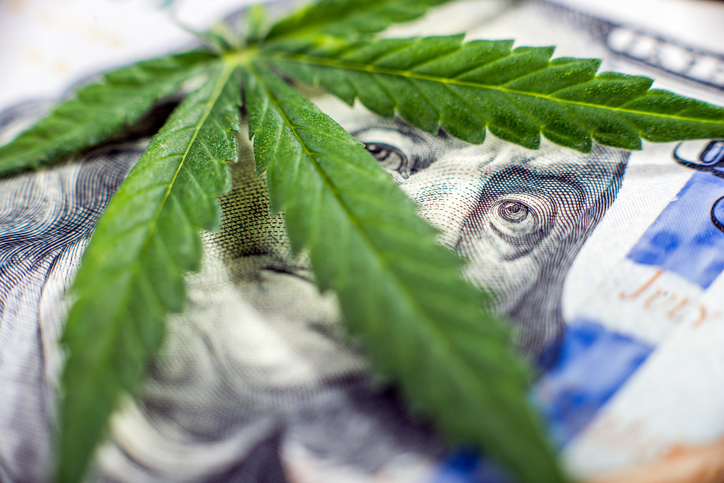 The federal government is poised to apply a new herbicide to marijuana businesses throughout the United States: Section 6662 of the Internal Revenue Code. (26 US Code § 6662(a).)

While legal marijuana businesses have long been required to comply with federal tax laws, the Internal Revenue Service (“IRS”) is now uniquely equipped to increase enforcement efforts to penalize marijuana businesses in connection with their payment of federal tax. If you thought Internal Revenue Code section 280E (“280E”) was bad, just wait until you get a load of section 6662.

Under subsection (a) of this section, the IRS can impose accuracy-related penalties up to 20% (twenty percent) of the assessed underpayment of federal tax against a marijuana businesses. With tax season in full-swing, and in light of the challenges already posed by 280E, marijuana business owners, attorneys, and accountants should be on high-alert. 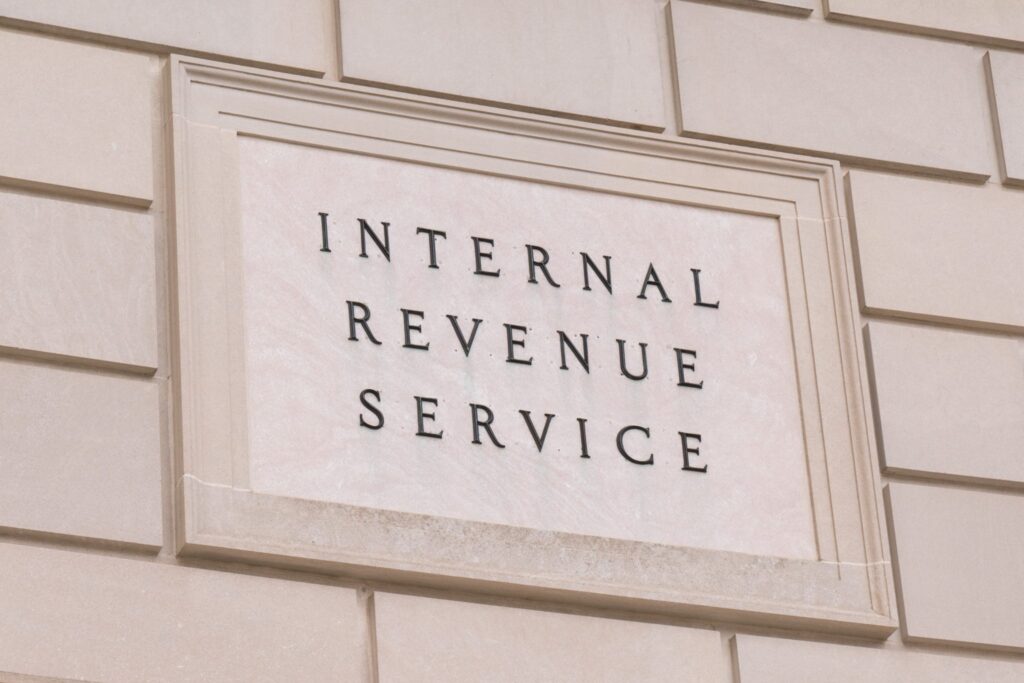 I.  280E & The Death of Marijuana Businesses

Although marijuana businesses are allowed to legally operate under state law, the same businesses remain illegal under federal law. As long as marijuana continues to be classified as a Schedule I controlled substance, as defined by the Controlled Substances Act (“CSA”), marijuana-touching businesses are subject to the limitations set forth in Internal Revenue Code section 280E (“280E”).

280E prohibits deductions and credits for the vast majority of business expenses incurred in carrying on the trade or business of trafficking Schedule I and II controlled substances, including marijuana. Generally, businesses subject to 280E can reduce gross receipts by the cost of goods sold (“COGS”), but cannot deduct other business expenses. Traditional business expenses which are deductible by non-marijuana businesses, such as employee wages, advertising expenses, and more, are not deductible by marijuana businesses, drastically increasing their taxable income and resulting tax liability.

The current federal legal landscape affecting marijuana businesses in connection with their payment of federal tax was shaped by Jeffrey Edmondson, a person admittedly self-employed in the trade or business of selling amphetamines, cocaine, and marijuana in the Minneapolis, Minnesota area during the (taxable) year 1974. Mr. Edmondson filed a tax return, claiming deductions for “ordinary and necessary business expenses” of his business under Section 162(a), which allows a taxpayer to deduct ordinary and necessary expenses paid or incurred in carrying on “any trade or business.”

In 1981, the United States Tax Court, against the argument of the IRS, ultimately allowed Mr. Edmondson to deduct thousands of dollars in expenses such as rent for his residence, telephone expenses, automobile expenses, and purchases of equipment (e.g. a scale, packaging, and more). The Court also expressed it would have allowed Mr. Edmondson to deduct additional expenses for travel and entertainment, including $250 for air fare and $200 for food and entertainment for a business trip to San Diego, California, in December of 1974, if he had complied with the substantiation requirements of section 274(d) (e.g. a receipt as “clear proof of an expenditure”). The Court expressed that where it legally could, it did believe Mr. Edmondson’s representations regarding the facts of the case: “The nature of petitioner’s role in the drug market, together with his appearance and candor at trial, cause us to believe that he was honest, forthright, and candid in his reconstruction of the income and expenses from his illegal activities in the taxable year 1974.”

Dissatisfied with this outcome – that is, an admitted drug dealer successfully availing himself to deductions allowed under the federal tax code – Congress passed Section 280E, seeking to reverse the effect of that 1981 landmark case by denying deductions and credits for the business expenses of a business engaged in trafficking a Schedule I or Schedule II controlled substance under the CSA.

Since the enactment of 280E, the IRS has historically provided very little guidance with respect to navigating disallowed expenses under 280E for marijuana businesses in connection with their payment of federal tax, making underpayment a real and reasonable result of even the most diligent accounting practices throughout legal marijuana markets. Indeed, no references to marijuana businesses can be found in IRS publications at all until the year 2020. 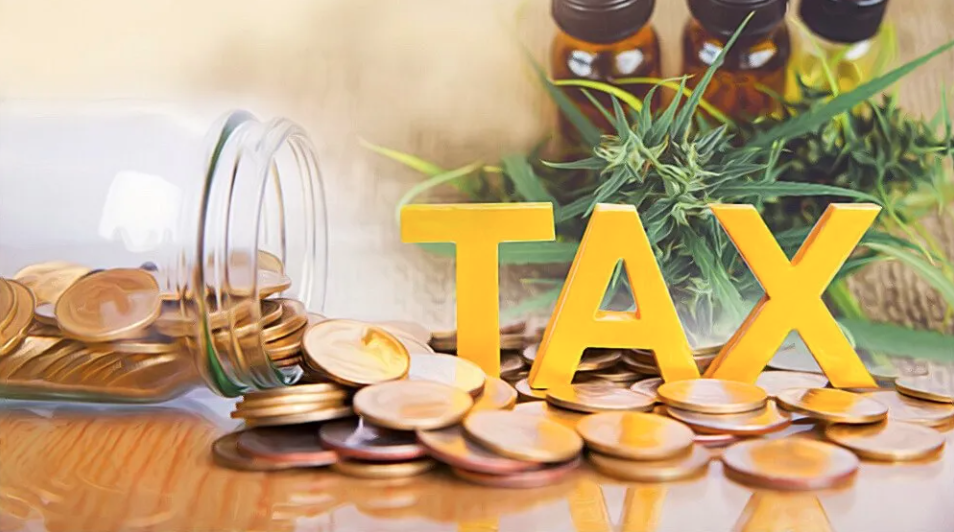 It was not until September 2020 that the IRS published a website regarding tax policies applicable to marijuana businesses regarding their obligations under federal tax laws and authorities, explaining: “The goal of this initiative is to implement a strategy to increase voluntary compliance with the tax law while also identifying and addressing non-compliance.”

However, there may be an additional purpose to the IRS’s publishing of such “guidance”, which will likely manifest shortly after April 18, 2022: the increased imposition of penalties for marijuana businesses that underpay their federal taxesin c. (Yes, by even one cent).

A. LEGAL STANDARDS UNDER SECTION 6662(a)

The IRS bears the burden in a legal action to demonstrate that the imposition of such an accuracy-related penalty is appropriate in each case, including against marijuana businesses in connection with their payment of federal tax. 26 US Code § 7491(c); Higbee v. Comm’r of Internal Revenue, 116 T.C. 438, 446-47 (U.S.T.C. 2001). However, “[w]here a case is one ‘of first impression with no clear authority to guide the decision makers as to the major and complex issues,’ a negligence penalty is inappropriate.” Foster v. Commissioner, 756 F.2d 1430, 1439 (9th Cir.1985). Indeed, the Court invoked this maxim in Olive v. Commissioner, finding no accuracy-related penalty was warranted against San Francisco’s Vapor Room, a medical marijuana dispensary (which also sold products that were not marijuana and attempted to deduct traditional business expenses pursuant to the argument that the company was not solely carrying on the trade or business of trafficking a Schedule I drug. 792 F.3d 1146 (9th Cir. 2015)).

B. “NO CLEAR AUTHORITY TO GUIDE DECISION MAKERS”

Thus, the IRS was keenly aware of its need to bridge the informational gap identified in Olive v. Commissioner in order to nail marijuana businesses with these additional penalties. In other words, if accuracy-based penalties would continue to be denied because there was “no clear authority to guide the decision makers as to the major and complex issues” regarding marijuana businesses in connection with their payment of federal tax, and because marijuana businesses could continue to argue that they were not negligent and did not disregard the (at the time, non-existent) guidance of the IRS, then, in order to be able to successfully obtain these penalties in the future, the IRS needed to provide this “guidance.”

In short, only when the “guidance” had been provided could the IRS successfully pursue accuracy-based penalties against marijuana businesses. Enter, the IRS’ “Marijuana Industry” website. 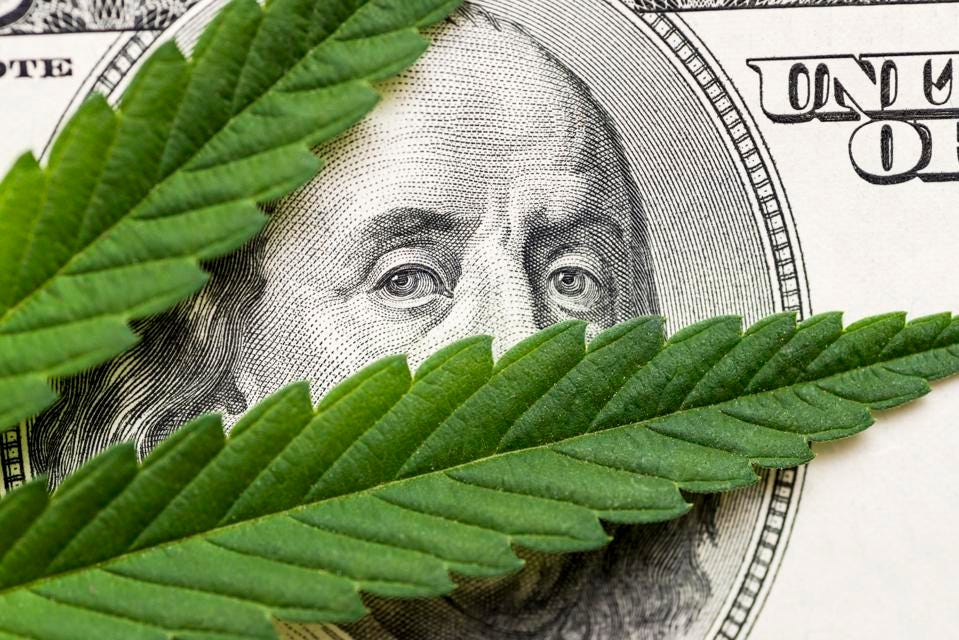 Through the existence of this website, and the relevant regulations, rulings, notices, announcements, and related guidance or requirements published and linked therein, the IRS is primed to pursue these accuracy-based penalties against marijuana businesses in connection with their payment of federal tax. The IRS is empowered to now argue in support of such penalty that any issue raised by the application of 280E to state-legal marijuana businesses “trafficking a Schedule I drug” under Federal Law “does not implicate an unsettled legal issue or a question of first impression. See Foster, 756 F.2d at 1439.” Van Camp Bennion v. U.S., 251 F.3d 862, 869 (9th Cir. 2001). That is, the IRS is now equipped to argue that a marijuana business that underpays their taxes is negligent for having failed to make a “reasonable attempt to comply with the provisions of the Internal Revenue Code,” or has disregarded the rules or regulations (which term includes all provisions of the Code, all temporary or final regulations issued under the Code, and revenue rulings or notices, other than notices of proposed rulemaking, issued by the IRS and published in the Internal Revenue Bulletin) and should be penalized under 6662(a). 26 CFR § 1.6662-3(b)(2).

Not only is increased enforcement of accuracy-based penalties against marijuana businesses in connection with their payment of federal tax the logical conclusion, especially in light of the demonstrated historic and ongoing policy and conduct of our federal enforcement agencies, the IRS’s own internal communications demonstrate their present intent to pursue additional accuracy-based penalties against marijuana businesses, even despite a business’ good faith efforts to comply with this murky and ever-changing area of law and policy. 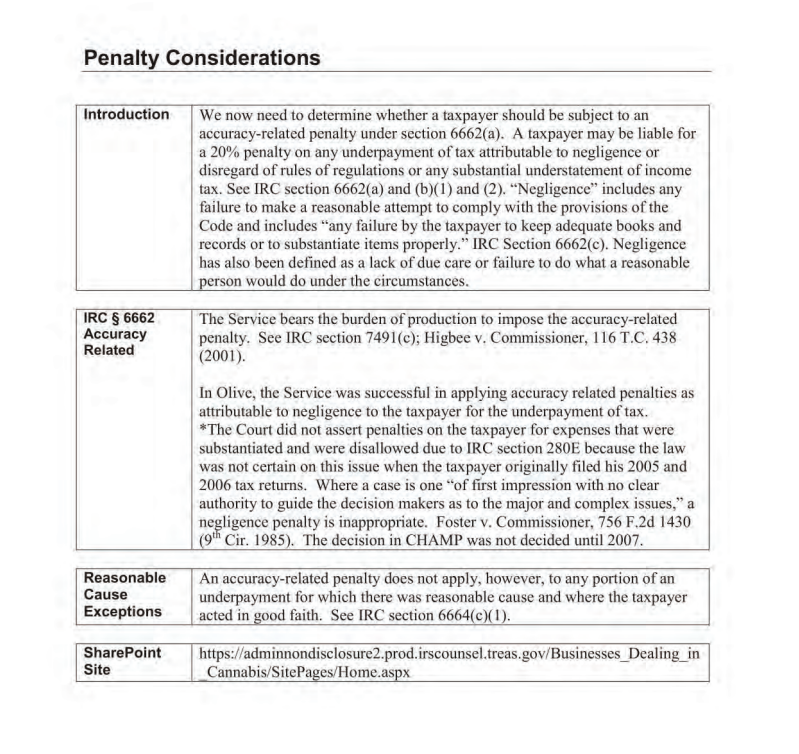 Page 28 of the IRS “Participant Guide”

Marijuana industry experts have known for years the IRS was internally circulating various guidance documents, educating and empowering agents to enforce Section 280E, including its penalty provisions, against marijuana businesses in connection with their payment of federal tax for years. In late 2021, a federal public records request revealed one such document: a cannabis industry audit guide, called a “Participant Guide” by the IRS. The document, ostensibly internally circulated in April 2015, contains various subsections, such as “Introduction to the Marijuana Industry” which explores various rudimentary (and inaccurate) topics such as “Sativa and Indica Varieties,” and couples them with “Audit Techniques.” Notably, the 2015 document also includes a separate section titled, “Penalty Considerations.” In this section, the IRS identifies the problems created by the fact that these cases are “one[s] of first impression with no clear authority to guide the decision makers,” and identifies various case authorities relevant to the discussion above by name.

These legal barriers now arguably removed, coupled with IRS agents who have been being educated and empowered since at least 2015 to pursue additional penalties against marijuana businesses in connection with their payment of federal tax – “if not required, to apply the Sec. 6662 penalty for all asserted underpayments of tax” – create the perfect conditions for a storm of accuracy-related penalties against marijuana businesses for underpayment of federal tax under IRC section 6662(a).

Clients are more likely to avoid an accuracy-based penalty by demonstrating they made a reasonable attempt to comply with the Code (either by their own actions or vicariously through sufficient and reasonable reliance on a tax professional), and therefore should not be viewed as negligent.

Thus, it is critical for cannabis businesses following the guidance first set forth in Californians Helping To Alleviate Medical Problems, Inc. v. Commissioner of Internal Revenue (128 T.C. 173 (T.C. 2007), 20795-05) to work with their attorneys and accountants to establish, maintain, and substantiate the existence of a non-trafficking trade or business. (Note: Ensure you comply with all state laws regarding permissible businesses to be taking place by, at the location of, and/or in tandem with licensed marijuana businesses.) Proper business structures and accounting procedures which accurately and correctly allocate expenses between the trade or business of marijuana “trafficking” and the other trade or business, are critical. Without these, the IRS is enabled to dig in to your business(es), re-allocate expenses against your interest, and assess substantial penalties against you for the pleasure thereof – potentially business-ending penalties, such as the $1.9 million tax bill imposed against Vapor Room (discussed above). 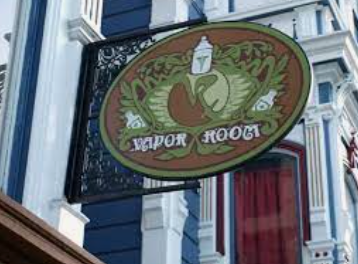 It is also advisable for all marijuana businesses to maintain records for all expenses, even those that are not legally deductible at the federal level. This is because good, well-organized records not only make it easier to prepare and substantiate an accurate (and even advantageous) tax return, track expenses, help provide answers if a return is selected for examination, and to help avoid an independently authorized penalty under 6662(a) for failure “to keep adequate books and records.”

Contact Heidi Urness Law, PLLC with your tax and accounting questions, other issues affecting your marijuana or hemp business, and any other cannabis-related issues.