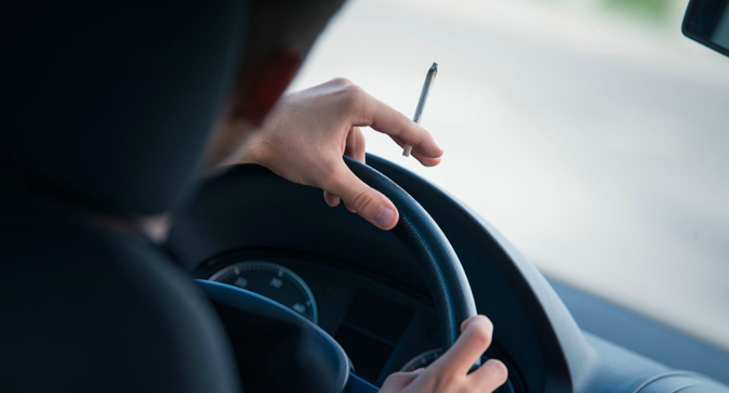 One of the key policy concerns regarding the federal legalization of cannabis centers on the public safety risk of drugged drivers. Not only do scientists and lawmakers disagree about the legally determined limit to which THC found in blood, breath, or saliva would constitute impairment, but to date no effective roadside test has been proven for reliable accuracy or effectiveness in detecting THC.

That may be about to change.

Last week, Michigan State Police (“MSP”) announced their roll out of a second phase of roadside drug testing, in which specially trained officers – known as drug recognition experts (“DRE”) – who suspect a driver of being under the influence of a controlled substance administer an oral fluid test which detects the presence of not only THC, but also amphetamines, methamphetamines, benzodiazepines, cocaine, and opiates. DRE’s administer the test by swabbing the inside of the suspected driver’s mouth; results are returned in approximately five minutes. More than fifty departments were identified as participating in the second phase, but notably not the Wayne County Police Department, where the city of Detroit is located. Failure to submit to the roadside test in one of these participating counties constitutes a civil infraction. 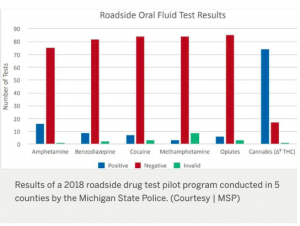 Michigan conducted a pilot program testing the saliva test devices, known as Alere DDS2 (but which has been renamed SoToxa in April 2019, according to the manufacturer, Abbott) in 2017 and 2018. While that pilot program provided valuable data, the overall sample size – consisting of only five counties where 92 roadside tests were completed – was determined to be “too small to draw any definitive conclusions on the tool’s usefulness for law enforcement,” according to the MSP. Additionally, the pilot program reportedly resulted in between five and eleven false-positives for THC (blood tests were administered to confirm).

Saliva-testing devices are fraught with conflict. Experts argue that the drug concentration in oral fluid does not accurately reflect the concentration of the drug in one’s bloodstream. Further, there are larger individual variations in oral fluid to blood concentration ratios. And, as largely applicable to THC products, the oral cavity may maintain disproportionately high concentrations of a substance, particularly after ingesting an edible or smoking. Because of these concerns, many argue the drug concentration in blood cannot be accurately estimated based on analysis of oral fluid. As a result, other companies are exploring and developing different technologies for quickly and correctly detecting THC in the body.

For example, the city of Boston is set to partner with Hound Labs, an Oakland-based company, as early as mid-2020 to test the company’s so-called weed breathalyzer. The company recently completed clinical trials with the University of California San Francisco utilizing Hound Lab’s “breath capture technology,” and reported that THC is present – and can be detected by the device – in breath for two to three hours after smoking, which the company claims is the peak impairment period for THC. Hound Labs boasts its device is the most accurate and reliable device because it is capable of capturing THC in breath in picograms. That means the unit can measure molecules in breath to one trillionth of a gram per liter of breath. (Alcohol, by contrast, is measured in parts per thousand and requires a much less sensitive breathalyzer than that required to detect THC.)

Several other companies, however, are working to beat Hound Labs to the punch. Canadian-based Cannabix Technologies, for example, is also working to develop and release a THC breathalyzer, which it is currently testing at both its Vancouver, B.C. lab and in partnership with the University of Florida. Other countries, too, like Norway, already utilize such roadside devices called Drager DrugTest 5000. Norway has been using the device since 2015, but an article published in the Journal of Analytical Toxicology in 2018 reported that the device resulted in “many false positive and false negative findings.” That same study concluded: “It is important that police officers understand that a positive test result for a drug in oral fluid should not be the only reason for suspending a driver’s license; there should also be other indications of drug impairment.”

While some law enforcement bodies are eager to roll out pilot programs testing such devices, others are taking a more prudent approach in light of these concerns. California Highway Patrol’s assistant chief of the Enforcement and Planning Division, Kevin Davis, has expressed such hesitation: “We’d like to get to point where there’s a little more courtroom acceptance and a little more acceptance in the scientific community.”

Indeed, even if a roadside THC-detecting device is proven accurate and reliable, scientists warn we still have a long way to go in understanding how, and for how long, THC impairs driving and all of its complex components including judgment, response, and skill. Across the country, lawmakers, scientists, police, and consumers disagree on what level of THC-concentration constitutes functional impairment – if any single limit even exits. While some have called for a single, science-backed THC-concentration threshold for determining that a driver is legally impaired, others argue that drugs do not affect people consistently – meaning a high concentration may significantly impair one person, but not another – posing a fundamental challenge to “per se” blood quantity limitations. And while the legal limit of .08 BAC is reportedly based on more than 30 years of scientific evidence, existing studies regarding the effects of THC on driving impairment are sparse, and even contradictory.

Fortunately, a relevant and major clinical study conducted by the University of California, San Diego is set to conclude and release results as early as next year. The study requires volunteers to inhale “cannabis” with either 0% (placebo), 6.7%, or 12.6% THC at the beginning of the day. Then, throughout the subsequent seven hours, volunteers are instructed to complete driving simulations, including iPad-based performance assessments, and bodily fluid draws. The study’s designers hope to “not only look[] at how impaired a driver is at different levels of smoking, but also how long that impairment lasts,” according to the study’s lead author, Thomas Marcotte. The study also seeks to determine whether the saliva or air can serve as useful substitutes for blood sampling, and also if iPad testing of driving simulations can serve to bolster field sobriety tests in identifying impairment from cannabis.

There is no dispute that more drugged-driving research is needed, and the relevant laws must evolve rapidly and responsibly, in order to eliminate impaired driving – as David Downs of Leafly puts it – as a “major roadblock to further acceptance and normalization and sort of mainstreaming of cannabis as a consumer product.”