Marijuana used to land you in jail; now it can land you on the Forbes list. However, while states across the country are decriminalizing cannabis and instituting their own medicinal and recreational programs, hundreds of thousands of nonviolent people — mostly black people — still currently sit behind bars or suffer other consequences of their criminal records for marijuana possession convictions.

In April, Seattle City Attorney Pete Holmes filed a motion in municipal court requesting the court vacate all convictions and dismiss misdemeanor marijuana possession convictions rendered between 1997 and 2010, a period of time prior to recreational legalization in Washington state. Should the court grant the motion, more than 500 individuals are expected to have their past convictions wiped from their records.

Holmes called the motion “one small step to right the injustices of a drug war that has primarily targeted people of color.” 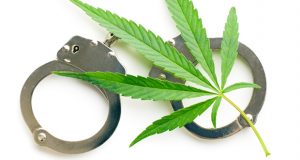 Seattle Mayor Jenny Durkan explained at a press conference earlier in the month, “Vacating charges for misdemeanor marijuana possession is a necessary step to correct the injustices of what was a failed War on Drugs, which disproportionately affected communities of color in Seattle.”

Communities of color bear the burden of disproportionate marijuana enforcement policies across the country, and even a progressive city like Seattle is no exception. While legalization offers hope to right many of the wrongs caused by misguided, costly and ineffective drug laws and policies, research shows that African-American citizens are still disproportionately targeted for arrest and prosecution for marijuana-related crimes.

Between 2001 and 2010, police across the United States made more than 8 million arrests for marijuana-related crimes — 88% of which were for possession alone. During those same years, marijuana-related arrests increased as well, accounting for more than half of all drug arrests in the country (marijuana possession arrests account for 46% of all drug arrests in the country). According to a 2013 report by the ACLU titled The War on Marijuana In Black and White, in 2010 “there was one marijuana arrest every 37 seconds, and states spent combined over $3.6 billion enforcing marijuana possession laws.”

Such disproportionate enforcement not only makes black people more likely to be arrested, but also more likely to be convicted and thus suffer punishment for and criminal records as a result of such now-legal conduct. Small-time marijuana convictions unfairly prevent people from obtaining stable housing, credit, jobs, and education, as well as put them at risk for deportation, termination of their parental rights and more.

The numbers suggest that legalization is accomplishing its goal of reducing the impact of drug arrests on minority communities by sending fewer people of color to jail and prison for marijuana offenses; however, the racial disparities in enforcement remain the same.

African-Americans are not the only people who are targeted for discriminatory drug enforcement and punishment policies. According to The Seattle Times, approximately 20% of King County residents are foreign-born, and the immigration rights of at least some citizens are likely to be impacted by the court’s decision.

Generally, under state law, if the court grants a motion to vacate a conviction, the court will set aside the verdict — meaning the defendant will be treated as if the first verdict never happened. The case will then be sent back to the prosecutor’s office, who will decide whether to pursue the charges again.

However, a 1996 federal law allows immigration courts to define a “conviction” more broadly than state courts, which can cause significant consequences for “offenders,” including deportation and the prevention of immigrants from obtaining U.S. citizenship, even though they may be vindicated under state law.

Under federal immigration law, to render a marijuana conviction moot and irrelevant to its consideration, a court would have to determine that the original charges never had a valid basis — even prior to the legalization of marijuana — an argument virtually impossible to make successfully, particularly in the current legal and political climate surrounding cannabis.

No Future for Convictions

This recent move by Seattle officials follows in the footsteps of Philadelphia District Attorney Larry Krasner. In 2014, Philadelphia police began issuing citations for marijuana possession instead of subjecting citizens to arrest, but in February, Krasner dropped misdemeanor marijuana possession charges against 51 people and announced that his office would no longer pursue such charges.

“I did it because I felt it was the right thing to do,” he explained. “We could use those resources to solve homicides.”

Colorado Governor John Hickenlooper said in February that he, too, is currently reviewing approximately 40 cases of nonviolent marijuana criminal convictions and looking into the proper legal relief to “get these people out of jail,” though it is unclear if he is considering the same vacate-and-dismiss vehicle used by Seattle officials.

His office announced in January that it will actively begin to “clear all marijuana misdemeanor convictions dating to 1975 and review all felony convictions to see if they are eligible for a reduction.”

Unlike the action taken in states like Colorado and Maryland, which offers partial relief (sealing of records, expungement) to people with misdemeanor criminal convictions for marijuana-related crimes only if they are able to successfully petition the court (which almost always requires an attorney), Gascón said he made the decision to automatically clear records so that citizens “will not have to jump through hoops to get relief.” His action alone, affecting only convictions rendered by the San Francisco District Attorney’s Office, is expected to vacate approximately 3,000 misdemeanor convictions, and an additional 5,000 felonies will be eligible for review for reduction.

Be sure to contact an attorney before disclosing or discussing past criminal convictions for marijuana possession or other marijuana-related crimes with anyone — particularly with a city, state or federal prosecutor. You will need a skillful attorney, well-versed in the nuances of criminal law and with recent changes in cannabis law in your state, to act on your behalf to both protect your interests and navigate this treacherous legal territory in order to obtain relief on your behalf.