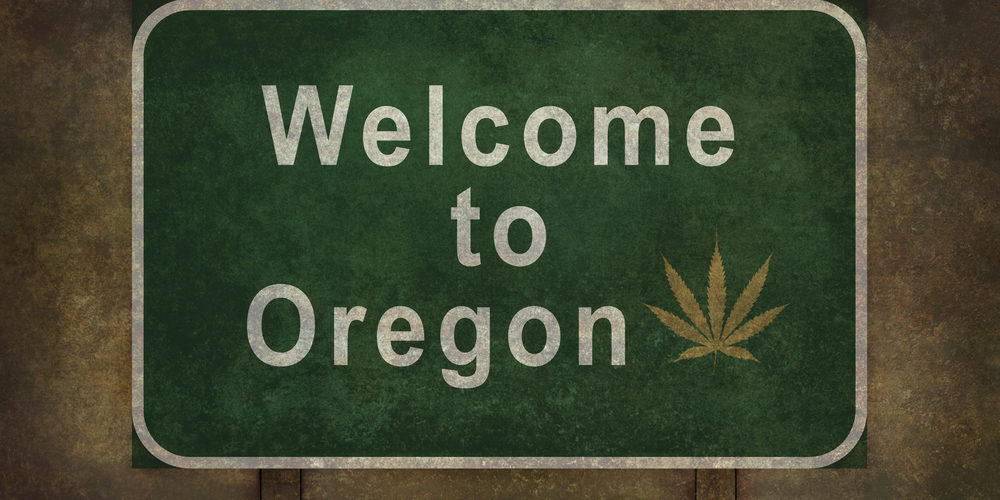 On Friday, the U.S. Attorney for the District of Oregon, Billy Williams, issued a memorandum titled “Priorities in Enforcement of Federal laws Involving Marijuana in the District of Oregon.” The memo explains that changes are afoot in enforcement policies and practices with respect to federal marijuana laws in Oregon. These so-called changes are authorized, the memo asserts, pursuant to the Sessions Memorandum issued in January, which rescinded previous Justice Department guidance related to deprioritizing (read: halting) federal enforcement of the Controlled Substances Act issued during the Obama administration. However, an analysis of the memo’s black letter text and spirit reveals nothing more than a reiteration of enforcement priorities as first expressed in the Cole Memo in 2013.

In light of the Sessions memo issued last January, in February U.S. Attorney Williams convened a summit to discuss these issues. From the wide range of viewpoints and opinions expressed from more than 130 people representing nearly 70 organizations, he distills the following: “First, there is urgent need for more comprehensive and accurate data on the scope and effect of marijuana production and distribution in Oregon. Second, too few resources are devoted to enforcement and oversight of the State’s marijuana regulatory regime. Third, there can be no doubt that there is significant overproduction of marijuana in Oregon.”

Of these issues, the memorandum goes on to heavily focus on the third point above. It explains that there is a correlation between overproduction in the state and “a thriving black market [] exporting marijuana across the country, including to states that have not legalized marijuana under their state laws,” and that Williams’ office will prioritize enforcement actions accordingly, making such criminal activity “a top priority until overproduction that feeds exportation of marijuana across Oregon’s borders stops.”

However, it has been a long-standing priority in federal enforcement policy and practices to target marijuana violations that have such interstate impacts, even under the Cole Memo. In 2013, one year after Colorado and Washington began regulating the of production, processing, and sale of marijuana, the U.S. Department of Justice announced updates to its federal marijuana enforcement policy. In this memorandum, known as the Cole Memo, the Department of Justice expressly deferred its right to challenge state laws allowing the production, distribution, and possession of marijuana so long as the states established strict regulatory schemes that protect the eight federal interests specified in the Department’s memo, including “[p]reventing the diversion of marijuana from states where it is legal under state law in some form to other states.” (Cole, James M., “Memorandum For All United States Attorneys,” August 29, 2013.)

Diversion to the black market was thus one of the core eight principles discussed by the Department of Justice as far back as 2013. “Diversion” occurs when a cultivator or producer of marijuana in a state in which the product is legal has more product than it is able to sell either profitably or legally. The cultivator or producer is required under Oregon law to destroy the excess product, but when the product is “diverted,” the product is instead sold or otherwise transferred to another state or county where marijuana is illegal. And the practice can be quite profitable: Sophisticated smugglers are able to take advantage of the nation’s current patchwork of cannabis laws and boost profit margins significantly, selling product to – for example – an east coast city where marijuana is illegal for three times the price that the product would fetch in the local, regulated recreational market.

Diversion presents problems not only for states that have not legalized marijuana, but also for the states that regulate it. With respect to the former, states in which marijuana remains illegal complain they are forced to expend their state’s own time, efforts, and financial resources to prosecute and jail throughout their state smugglers of marijuana derived from the neighbor state. As explained by the representative of the state of Oklahoma in a lawsuit it filed along with Nebraska against the state of Colorado in 2014, “Marijuana flows from [Colorado] into neighboring states, undermining [Oklahoma and Nebraska’s] own marijuana bans, draining their treasuries, and placing stress on their criminal justice systems.” The Supreme Court declined to hear the lawsuit – the only court authorized to hear and rule on interstate disputes – leaving states that have not legalized marijuana without recourse. Following the court’s declination, Nebraska’s Attorney General indicated he was working on taking additional steps “toward vindicating the rule of law,” while Oklahoma’s Attorney General directed Colorado to “do the right thing and stop refusing to take reasonable steps to prevent the flow of marijuana outside its border.” 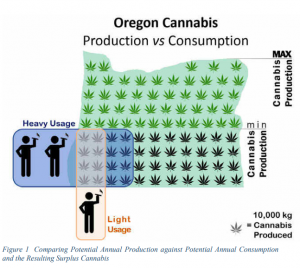 With respect to the latter, Oregon, like Colorado (and also Washington, California, and others) too suffers when product is wrongfully diverted across state lines as black market activity and the dangers associated with such activity increase and additionally undermine regulatory schemes. Law enforcement agencies have argued for a long time that overproduction encourages over-producers to participate in the black market. However, evidence may not necessarily indicate causation, or even correlation between overproduction and the black market — in fact, Oregon has twice the diversion rate of Washington State despite having half the population. Perhaps other factors are at work in Oregon:

For example, historically, Oregon was the first state to decriminalize possession of small amounts of marijuana, dating back to 1973. Oregon State Police claim this longstanding history of permissible pot led to the state, for the decades it was the only decriminalized jurisdiction, serving as the country’s primary producer of product on the black market – and perhaps this is simply a tradition that continues today. Indeed, according to a report issued by the Oregon State Police’s Drug Enforcement Section titled “A Baseline Evaluation of Cannabis Enforcement Priorities in Oregon” (January 2017), production levels for cannabis were already outstripping demand in the state prior to the passage of Measure 91 in 2014, which authorized the recreational use of marijuana in the state. Additional evidence indicates that illegally exported marijuana conservatively valued between $13.4 million and $19.2 million in the ten years between 2006 and 2016 was sourced from just six specific counties in Oregon. Perhaps these black market cultivators who have already been operating for the past half-century – if not more – are merely continuing their operations today despite the new regulations. And perhaps blaming new legal market participants for the diversion rates the state currently observes is misplaced, and wrongfully assumes legal market participant’s willingness to engage in criminal or otherwise prohibited activity.

If it is true as the Oregon State Police assert that the medical marijuana program in the state, dating as far back as 1973, produced more marijuana than what was needed to meet in-state consumption needs and thus this marijuana was diverted to supply to the black market (i.e. everywhere other than Oregon) for the past nearly half-century, then perhaps overproduction does not cause otherwise law-abiding business owners to revert to unscrupulous behavior as law enforcement purports. Critics of the correlation drawn by law enforcement between overproduction and black market participation argue that new participants in the recently legalized recreational sector of the state’s marijuana industry are law-abiding citizens who work vigorously to comply with the state’s cannabis regulations, and that they are being wrongfully targeted by such enforcement practices as those proposed by U.S. Attorney Williams.

Indeed, overproduction does not always lead to diversion to the black market. The state of Washington experienced a massive oversupply in the market two years ago, when greenhouse growers flooded the market with product, but did not experience a slide into the level of diversion experienced in Oregon. In the summer of 2016, the price of marijuana plummeted as a result of overproduction. Licensees were concerned about market stability; State officials were concerned about diversion. However, Washington officials decided against imposing producer license caps beyond those imposed based on maximum-canopy limitations (which affects the tier of the producer license) and, by the next year, the market achieved even greater stability than ever before: companies throughout the production chain sold at more consistent rates, buyers made smaller average-deal-size purchases at more frequent rates, and marijuana business reported being able to manage inventory and cash flow more accurately and effectively. Due to these positive outcomes and the absence of increased diversion activity, state leaders have not expressed concern, nor have they felt compelled to enact additional rules or prioritize certain enforcement policies, with respect to issues related to overproduction and diversion in Washington.

Colorado, too, has experienced product surges throughout the past five years of the industry’s legal existence in the state, but market activity there also refutes law enforcement’s blanket assertion that overproduction leads to black market participation. Colorado’s experience was that the industry, instead of sliding into illegal market participation as a result of overproduction, responded there by innovating ways of integrating marijuana into new and better products such as edibles, extracts, and concentrates. In fact, during one 24-month period throughout 2014 and 2016, the number of licensed infused cannabis product manufacturers in Colorado surged more than 150%. This shift resulted in an increase in market diversity, greater efficiency throughout the production chain, and thus higher profit margins. Further, market competition increased, resulting in beneficial external and internal business acquisitions and restructuring, as well as the failure of businesses offering substandard product or engaging in ineffective business practices. Indeed, Colorado remains one of the most open and unregulated markets when it comes to quotas, caps, or similar license restrictions, to date, and has made no steps towards imposing nor indications suggesting the imposition of such limits in the future.

Thus, even as far back as 2013, under the Cole Memo, the states were directed – if they chose to regulate marijuana – to enact and enforce strict regulatory schemes that protect the eight federal interests described in the Department’s memo, including diversion, in order to avoid the need of law enforcement to arrest, incarcerate, seize, or otherwise take legal action against licensed industry participants in the state. In response to this directive, the states have utilized a variety of tools to combat such wrongful activity including relying upon fluctuating market-based canopy limitations, enforcing predetermined and inflexible licensing caps, or taking no action whatsoever and instead allowing the market to find its balance, as described above.

IV.   The Future of Federal Marijuana Enforcement in Oregon

It remains unclear what the relationship is between overproduction and black market participation, or what recourse will be most effective in allowing communities across the country to find their own unique sustainable saturation equilibrium and decrease diversion to a level acceptable by the federal government and the public at large. Nevertheless, the “reprioritization” of enforcement actions against those participating in diversion of marijuana as expressed by U.S. Attorney Williams is more properly characterized not as a new policy targeting these illegal actors under both state and federal law, but merely a reiteration and continuation of federal marijuana enforcement policies expressed as far back as 2013.